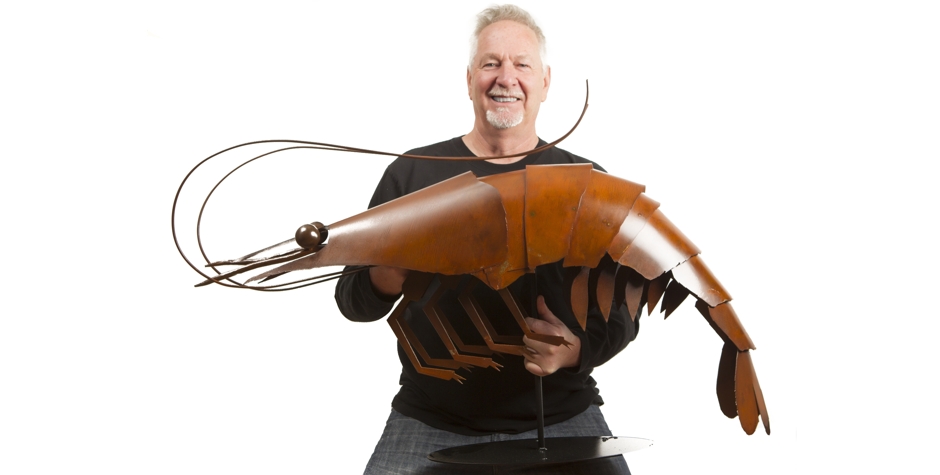 Foremost, Jack is an artist. His medium is metal, primarily steel, aluminum and copper. But he’s also a humourist, nature lover, storyteller and all-around family guy.

Hailing from California in the early 1960′s, his mother & stepdad moved the family from San Francisco to just north of the 49th for a fresh start. Settling into a suburb south of Vancouver, they arrived into the area when things were starting to hum.

Jack’s mother was an artist in her own right. Her natural talent was born out in her inspired charcoal drawings and cedar-block carvings. Her artistic gift to Jack was to be realized later in his life.

In his twenties, with Vancouver booming and the building industry in full throttle, Jack took to steel-from very high up. As a high-steel ironworker, Jack can look around Vancouver and identify landmarks he had a hand building, such as the Pan Pacific Hotel, Science World and BC Place Stadium. An accident took him off the high steel and he retrained as a welder. His skill in this field brought him to the attention of BCIT.

Looking to expand their curriculum with talented teachers, Jack was hired to teach the ironwork program.

It was at BCIT that a student brought Jack a picture in a magazine of a Hopi-carved coyote howling at the moon. The student wondered if it could be replicated in metal. Jack did up a drawing and using the high-tech equipment available to him at the institute, made his first piece of metal art. From that point forward Jack put his pedal to the metal; he had found his passion.

Out of a little shop in Ladner, Jack began to create. Right from the onset he made a promise with himself to engage the viewer with his art form through the use of whimsy, humour and celebration.

He started working with leading Vancouver designers to custom create unique metal sculptures and functional metal art. His work started to be recognized. His art was picked up by a number of notable galleries such as Butchart Gardens in Victoria, Chuckanut Bay Gallery in Washington State and Skitch Gallery in Whistler.

Frederique Philip of Sooke Harbour House gave Jack one of his biggest breaks. She asked to carry many of his most notable pieces in her gallery in the world-famous hotel on Vancouver Island.

In 1993, Jack and wife Barb moved their family from the BC Lower Mainland to Nanaimo on Vancouver Island. Anvil Island Design had found its permanent home.

By being true to his own vision of keeping it original and continuing to evolve, Jack’s art is now found in homes and offices worldwide and in upscale gift stores and art galleries across Canada and the US.

His quirky humour comes through in his black crow series. His love of nature and the sea is apparent in his widely-collected Japanese Maple Tree sculpture and his heron and octopus series. Cats, birds, dogs, dancing ladies, cavorting men, philosophical quotes, and one-of-a-kind commissions keep things interesting.

Jack is always looking, observing and thinking, much of which happens while riding his Harley Davidson, but often it is done by bouncing “what-do-you-think” ideas off wife, best friend and consort, Barb.

Using everyday metal, Jack holds the power of transmuting something common into something precious. His is art via alchemy. Okay, sometimes red wine helps too.

Willoughby is well-known in Canada and the US for his unique, humorous, whimsical designs using steel, aluminum, copper and iron.

He is often commissioned to do one-of-kind metal art for clients all over the world. His imaginative pieces may be found in homes, gardens and boardrooms around the globe.